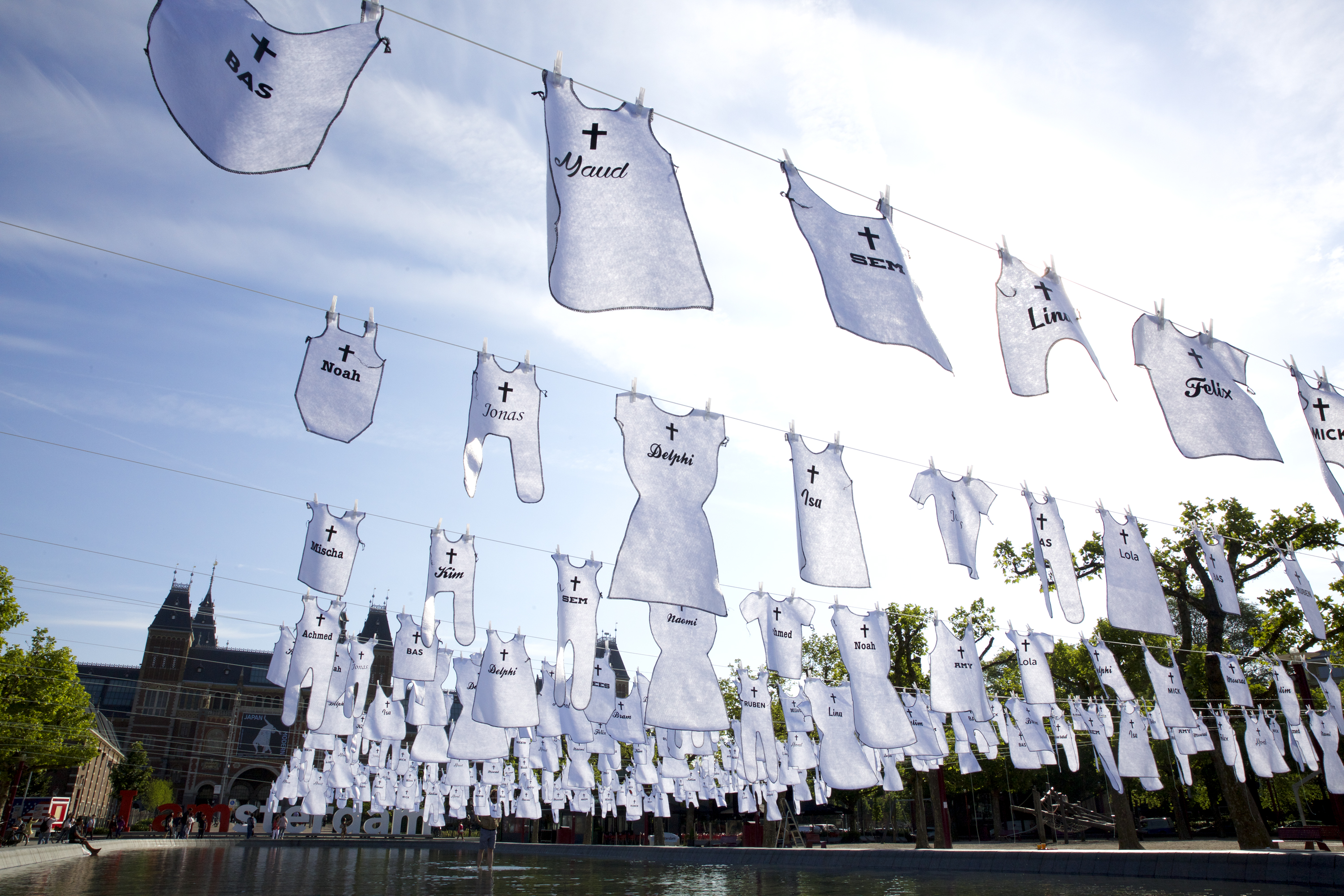 Power of Art House and several Dutch municipalities pay attention to the painful truth of child abuse with the art installation Small Victims, Large Numbers. The installation is a penetrating and poetic tribute to all children who lost their lives in the last ten years due to child abuse. Share your support #SmallVictims

The installation ‘Small Victims, Large Numbers’ aimed to reflect on the painful truth regarding child abuse. A poetic and moving homage to all children that passed away as a consequence of child abuse in the Netherlands in the ten past years.

‘Small Victims, Large Numbers’ is an art installation in public space containing hundreds of white small sized bodysuits, t-shirts and bibs with (fictive) surnames printed on them. Every piece of cloth represents a child that passed away as a consequence of child abuse in the past ten years in the Netherlands. More or less 52 children per year die because of domestic violence, which is 1 child per week in this country only. This is an alarmingly high amount. There is little awareness for the fact that there are so many under aged victims of domestic violence in the Netherlands. ‘Small Victims, Large Numbers’ was at show at the 10th and 11th of June 2016 at the Museumsquare in Amsterdam. The large artwork, 11 meters by 20 meters, got a lot of publicity and attention. Later on we showed the installation in different other Dutch cities.

THE AMOUNT OF DEADLY VICTIMES IS NOT DECREASING

Despite the effort of the organizations of medical assistance and the organizations that run awareness campaigns around the subject of domestic violence that victimizes children, we are facing a stagnation of numbers considering deathly outcomes. Already for years one child per week finds death as a consequence of child abuse in the Netherlands. Nowadays though, child abuse gets more often reported. Maybe because of the Dutch campaign ‘Het houdt niet op, niet vanzelf’, or the publicity around the death of the 8 years old Sharleyne from Hoogeveen. Sharleyne got neglected and died after falling from a high rise building. Her story was mediatized, but most victims pass away in silence. With ‘Small Victims, Large Numbers’ we are not aiming to solve the problem or to point fingers. “We do not judge the ones who are taking the effort to try to decrease child abuse. Though we can’t ignore the facts and numbers. We should all take the responsibility to do something about it.”

Power of Art House points out that victims of child abuse often refer to one particular individual in their surrounding who took the courage to break through the vicious circle of violence. Such individual makes the absolute difference in the life of a child who gets abused. The victims of domestic violence often experience the silence of bystanders as extremely painful. As if nobody cares about them. Children that are the victims of abusive behavior need people around them who signal and take action. That could be anyone: family members, teachers, neighbors etc. ‘Small Victims, Large Numbers’ was first at show above the pond at the Museumsquare, Amsterdam. The artwork was admired by passers-by, media and professionals. Several municipalities showed their interest as well and as a result the art installation was shown in Haarlemmermeer, Rotterdam and Eindhoven during the ‘Week against child abuse’ from 14 till 20 November 2016. In Haarlemmermeer the installation was at show in the Passage of the Center of Culture, Hoofddorp.  Besides an impressive commemoration took place in which councilor Marjolein Steffens speeched about the importance of creating awareness regarding this theme.

Read the speech (in Dutch) from Marjolein Steffens Small Victims, Large Numbers at the Center of Culture in Hoofddorp. ©Power of Art House

In Rotterdam ‘Small Victims, Large Numbers’ was at show at the ‘Schouwburgplein’. Councilor Hugo de Jonge reflected there upon the theme of child abuse and the effect of the art installation. After his speech, that took place on the 16th of November 2016, a protest march was organized by STERK, the Albeda College and the Erasmus University. Students from these educational institutes attended the march. Launch of Small Victims, Large Numbers in November 2016 at the Schouwburgplein in Rotterdam. Students of the Albeda College organized a march against child abuse. ©Power of Art House If you have questions about Small Victims, Large Numbers, Power of Art House or have a request for an interview you can contact Saskia Stolz via 06 248 960 53 or saskia[at]powerofarthouse.nl

‘Small Victims, Large Numbers’ was financially supported by ‘Defence for Children’. If you want to get to know more about the topic, you can call them: 0610472498 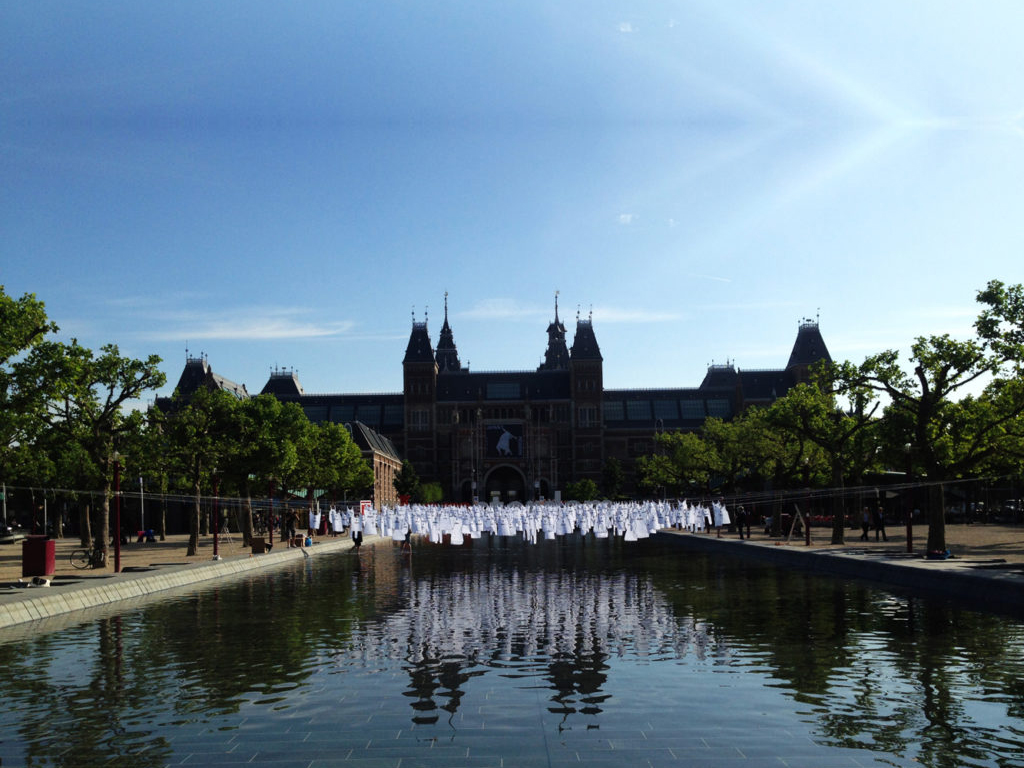