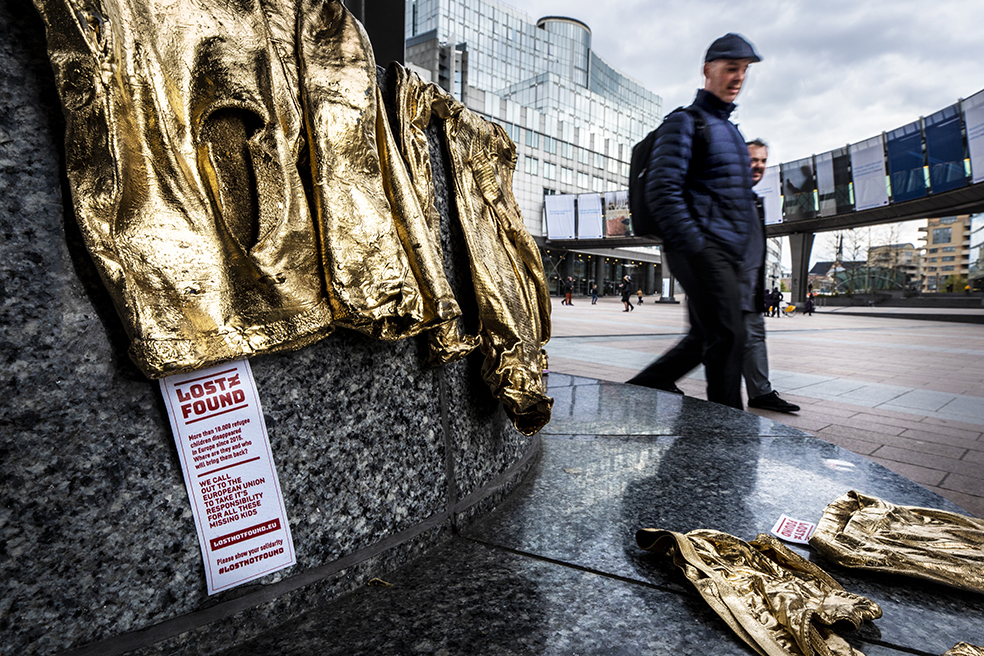 On May 7 we launched our new art project ‘Lost not Found’ in Brussels. Lost not Found is an art project of Power of Art House to raise awareness about more than 10,000 missing refugee children in Europe and to call out to the European Union to take responsibility.

10,000 missing refugee children
In 2015 more than 10,000 refugee children disappeared in Europe. The European Police Office (Europol) fears that a lot of these children fell in hands of criminal organisations that abuse or exploit children. In the best scenarios those lost children were traveling to another country and are since reunited with family. But a lot of them are being used for child labour or prostitution, or killed for their organs.

Art intervention
Through the art project Lost not Found we want to raise awareness about these lost children and call out to the European Union to take its responsibility and make the thousands of lost refugee children a priority on the agenda of the European Parliament. We are collaborating  with a variety of experts and journalists like Lost in Europe.

Creative Concept
To attract attention, we have turned hundreds of refugee children’s clothes into golden clothes and we will spread them in public spaces in several European Cities. The golden color triggers the public to take a closer look and poses a number of confrontational questions: what would it be like if these children had been rich? How much are these children worth to us? Do we think it’s worth searching them?

The children’s clothes are partly from refugee children who temporarily camped in the woods near Bladel (the Netherlands). These clothes were collected under the supervision of journalism collective Lost in Europe. 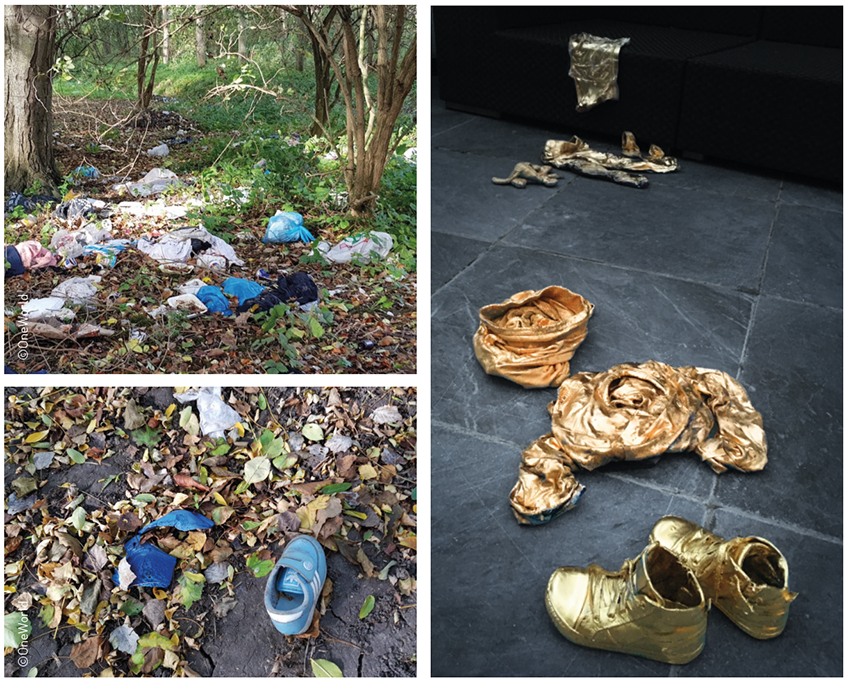 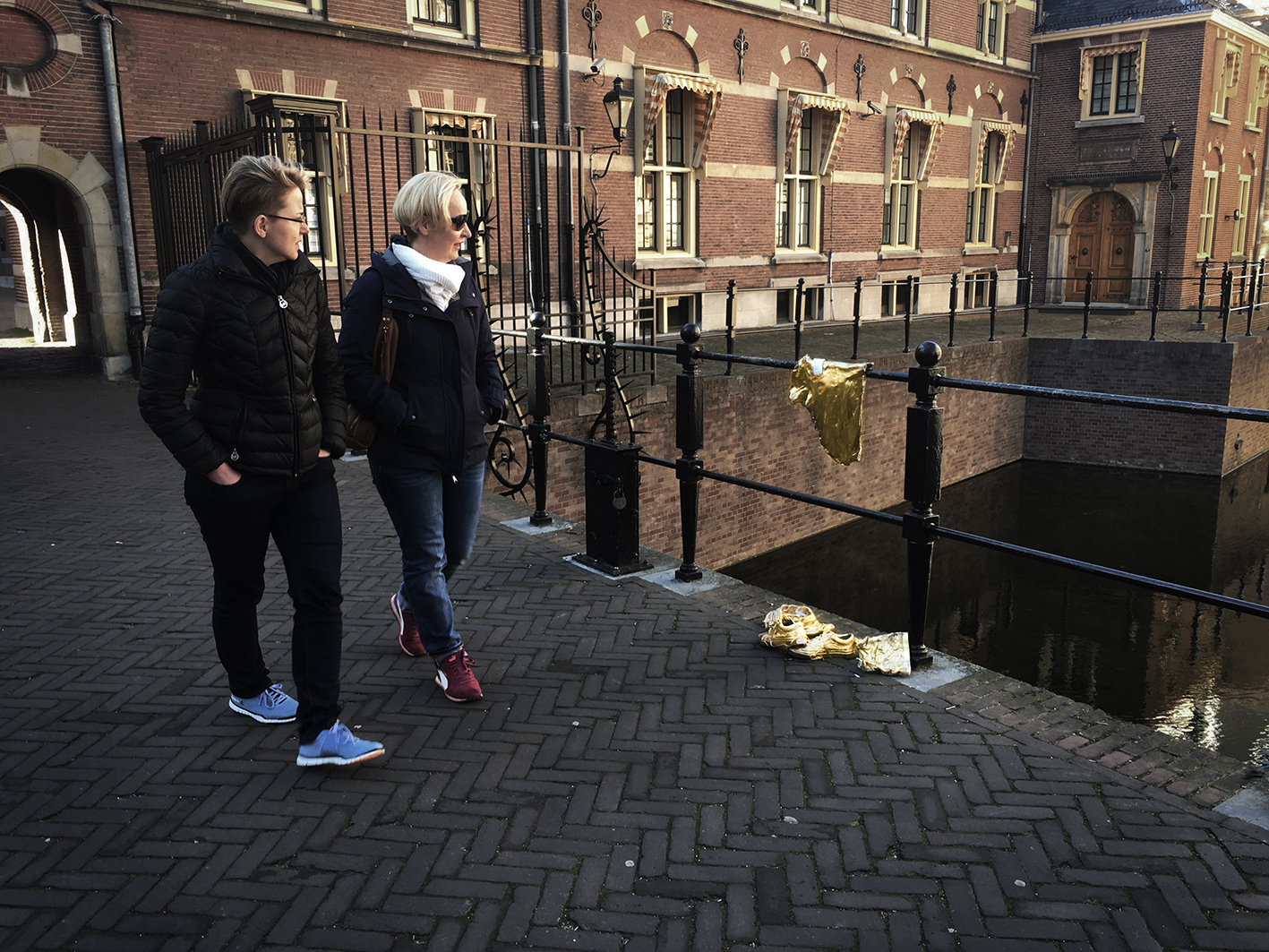 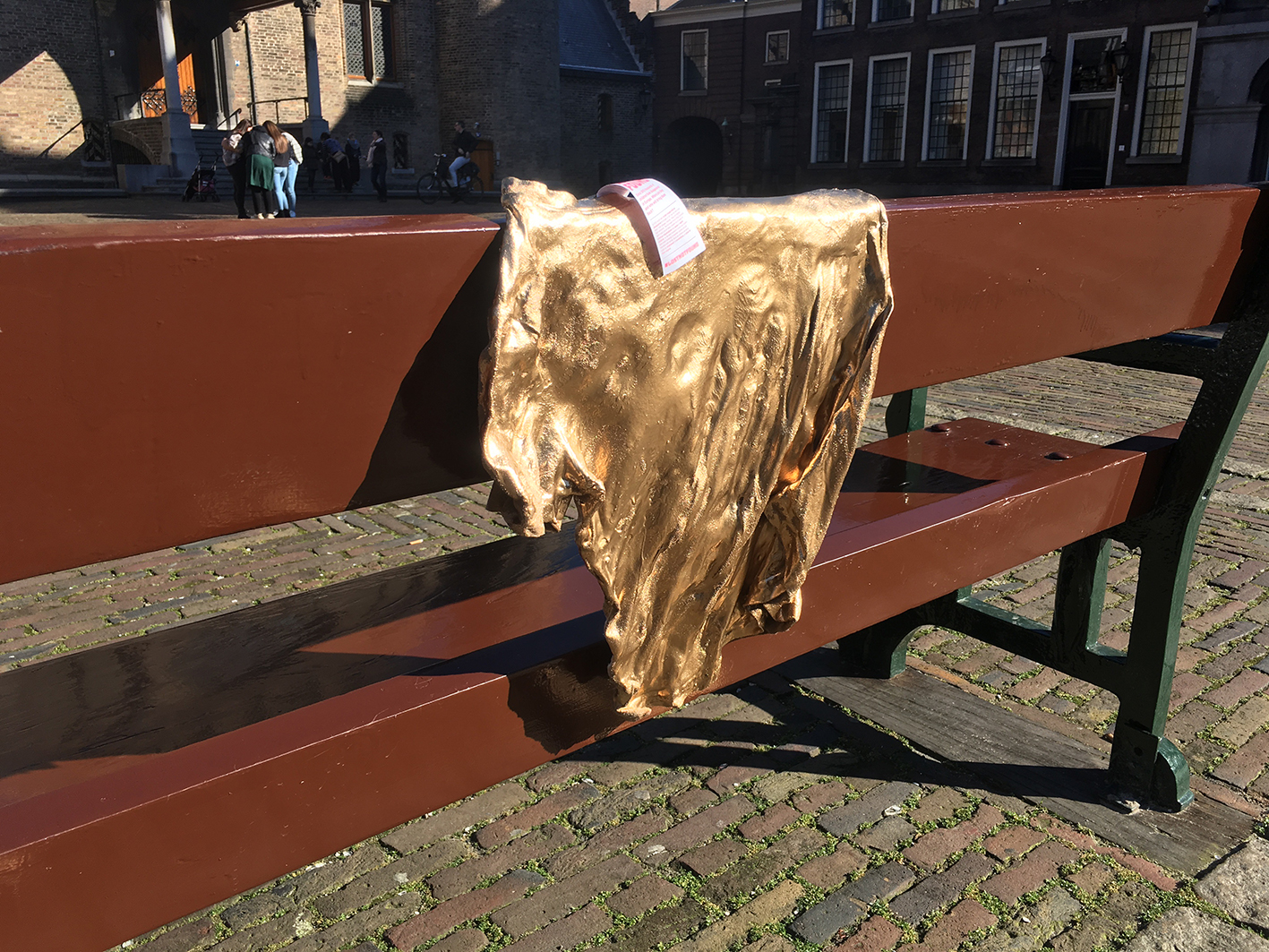 A label is attached to the clothes on which you can read some explanation of the project and a link to the website: www.lostnotfound.eu

Launch in Brussels (Belgium)
Power of Art House launched the intervention in Brussels in the first week of May 2019, leading up to the European Parliament elections. Brussels is considered to be the capital of the European Union (EU). Power of Art House calls out to policymakers and politicians to take their responsibility for all these lost children. “Every child has the right to a safe existence. All UN Member States, except the United States, have pledged to uphold that right by signing the UN Convention on the Rights of the Child. That means that every European country should make sure that all its laws and regulations are modified to meet the demands of this Convention,” says Power of Art House.

Big support
Lost not Found was supported by several prominent people. Among them is Hilde Vautmans (Member of the European Parliament), author of the book Where are they? In her book, Vautmans examines how it can be possible to lose track of so many refugee children in Europe. She also makes a number of clear proposals to improve the current migration system, such as speeding up family reunions, thoroughly reforming the Dublin rules, and stepping up the fight against human traffickers. “If we really want to end this problem, we will have to intensify the fight against human trafficking.” Hilde Vautmans, Member of the European Parliament. 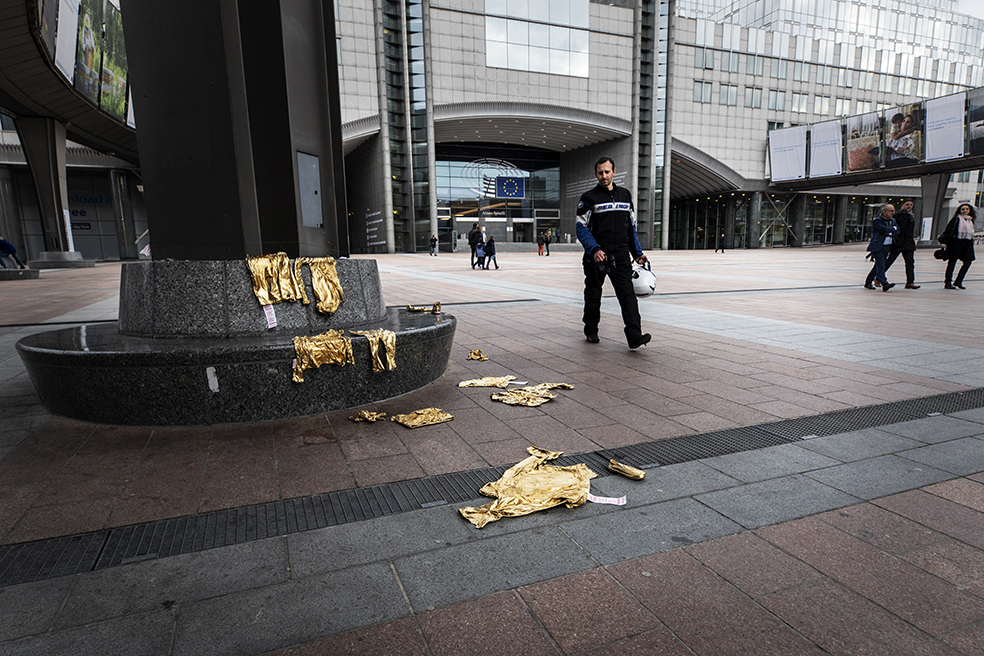 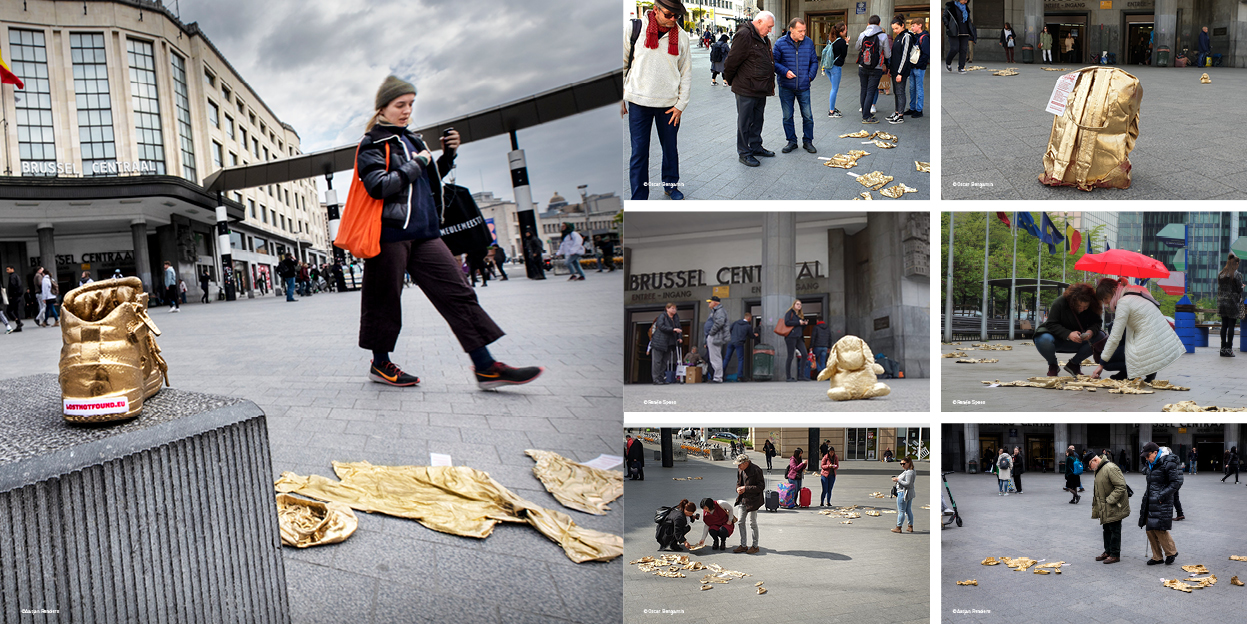 Delphine Houba, Alderwoman of Culture, Tourism, Big Events and Municipal Equipment, also reacted very positively:“Brussels is a refuge, a welcoming city for refugees, and this campaign is very dear to my heart. Thanks to a high-quality art installation, ‘Lost not Found’ manages to challenge a large audience to engage in a very important cause for our society and our community.” 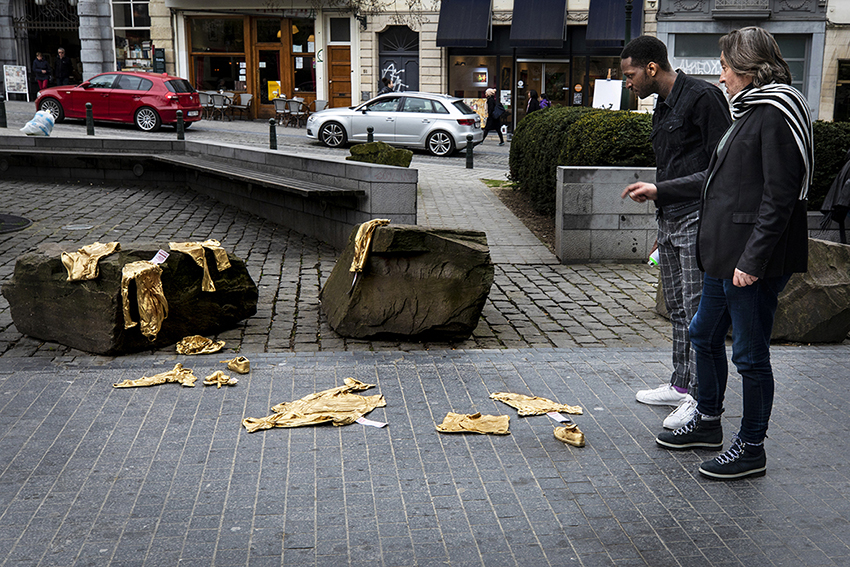 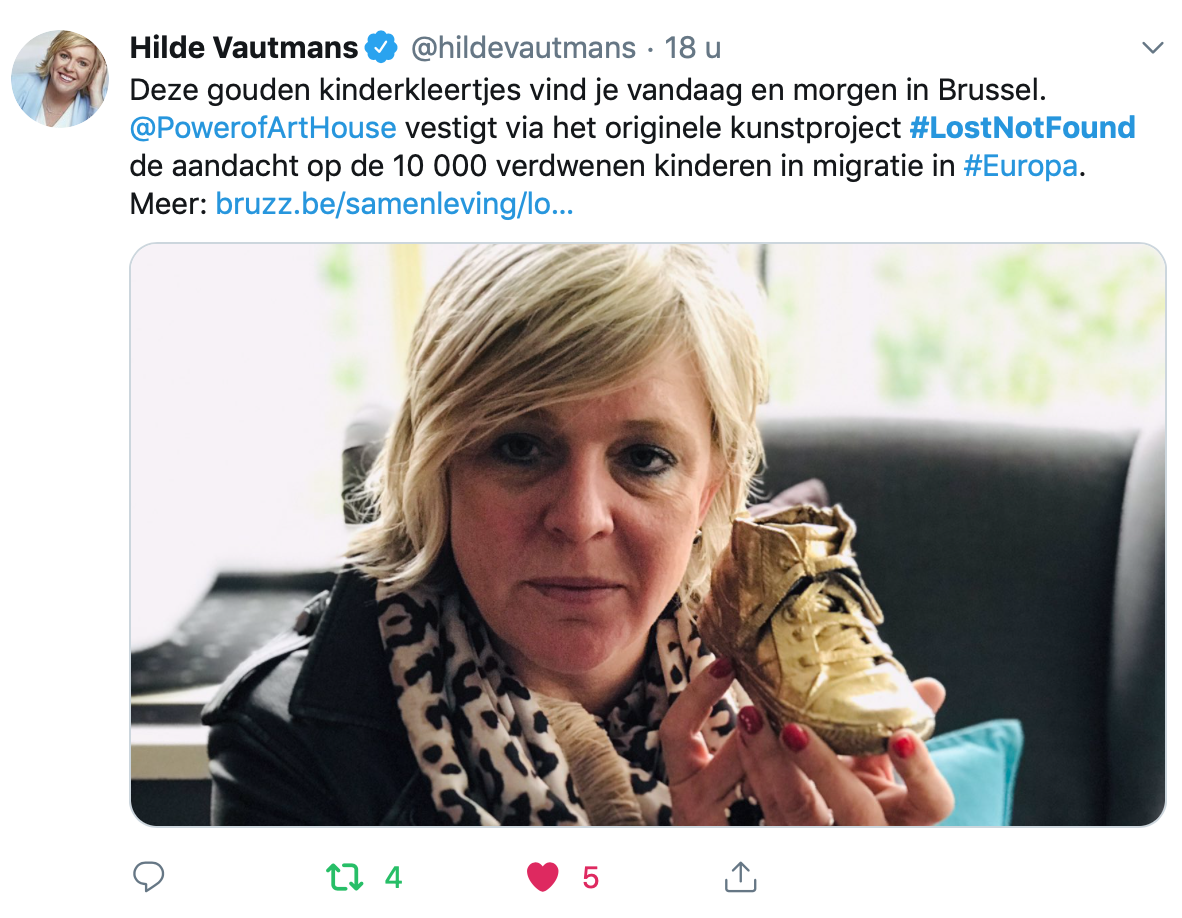 Amsterdam (The Netherlands)
We also intervened at The European Leadership Debat in Amsterdam on Sunday May 12. We spook to Bas Eickhout (Groenlinks), Paul Tang (PvdA) and Reinier van Lanschot (Volt) and we gave them a golden shoe. They all promised that they would make an effort to put this theme on the political agenda. 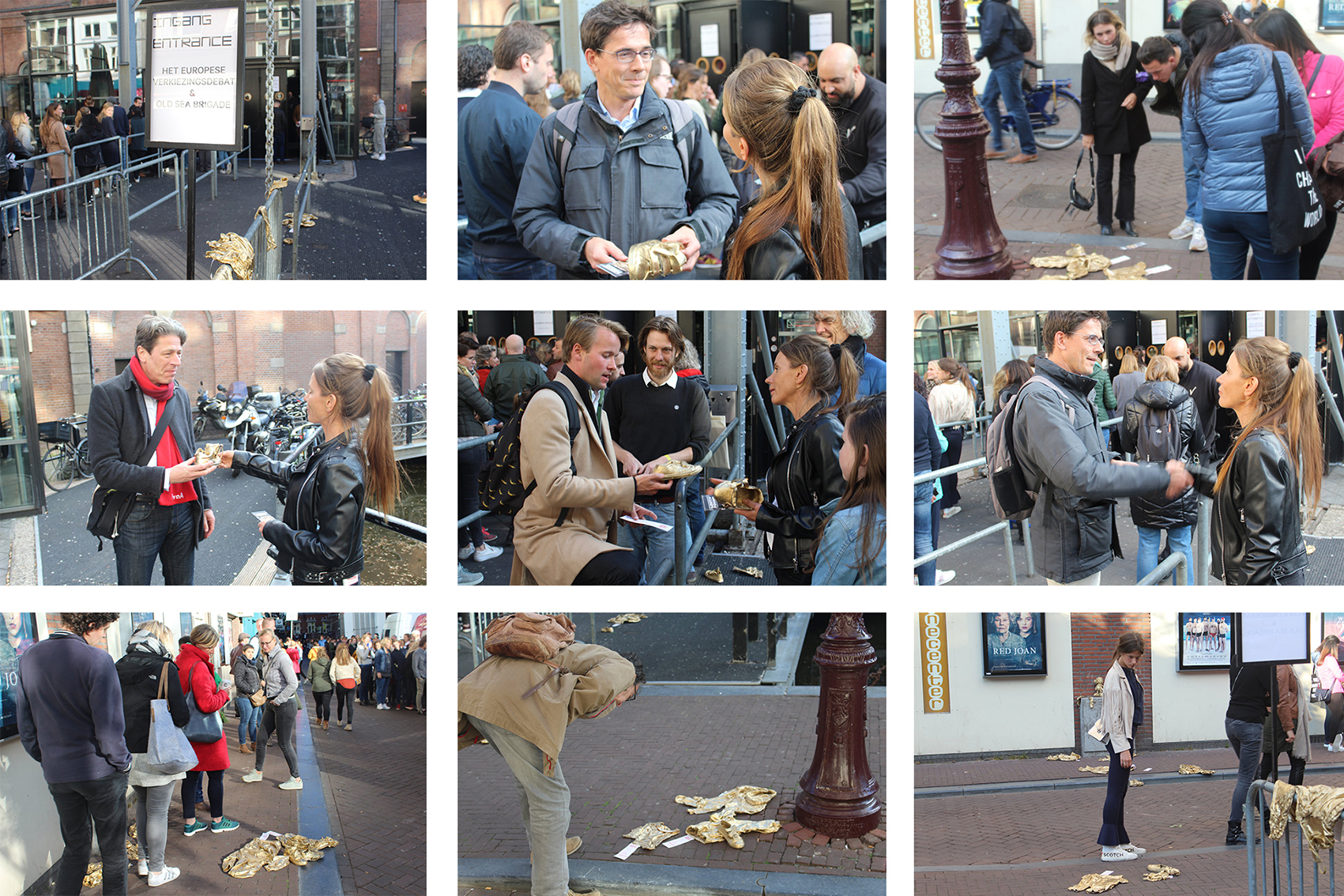 The Hague (The Netherlands)
Lost not Found also appeared around The Binnenhof in The Hague on May 20.

Also a lot of people are showing solidarity on social media. We are very grateful of course, nevertheless we have still a long road to go. 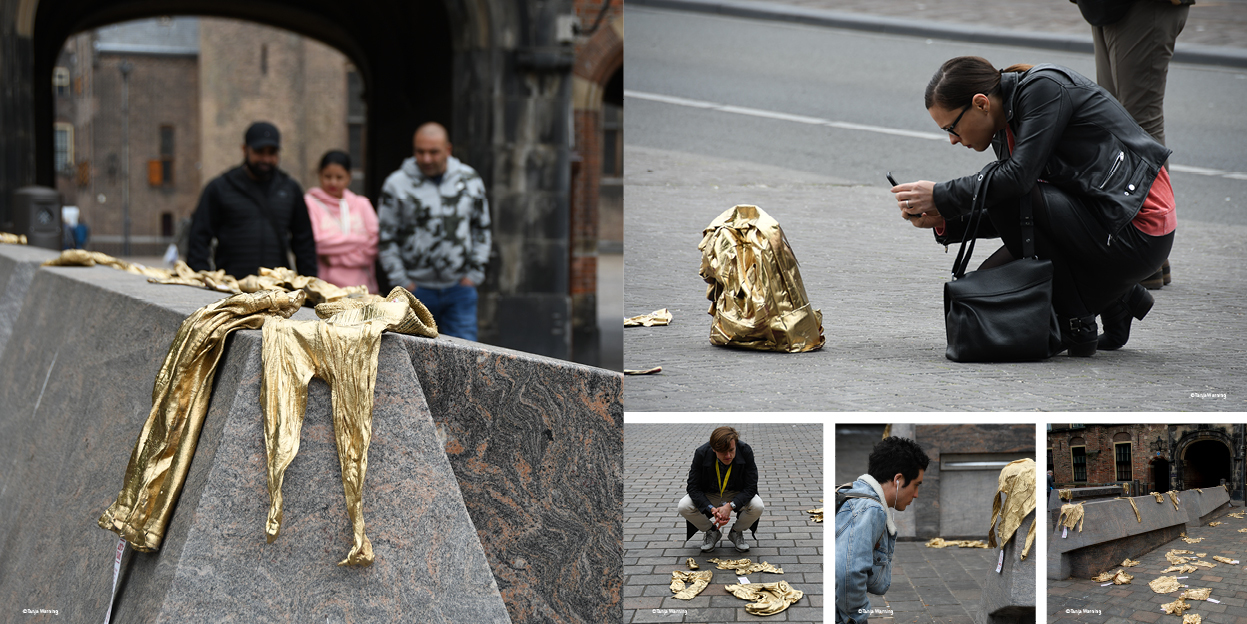 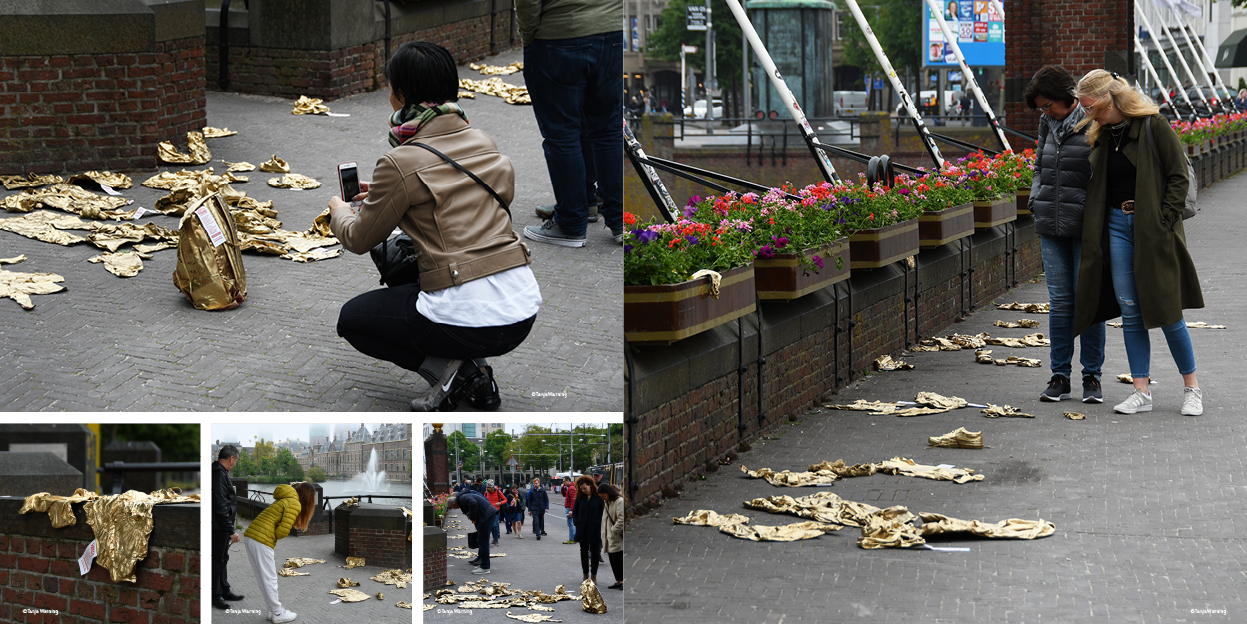 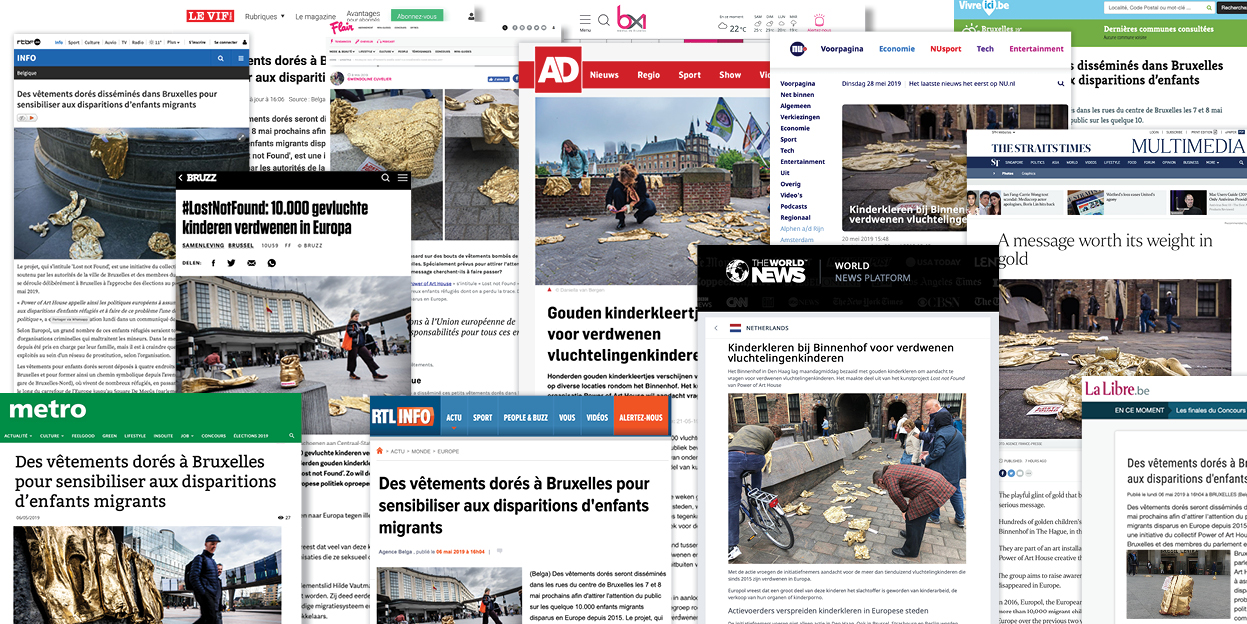 In the upcoming months we will go to Berlin, Strasbourg and to finally end up in Geneva at the UNHCR office. Do you want to stay updated about this project or maybe you would like to give us a helping hand… 🙂 please send a message to: info@powerofarthouse.nl 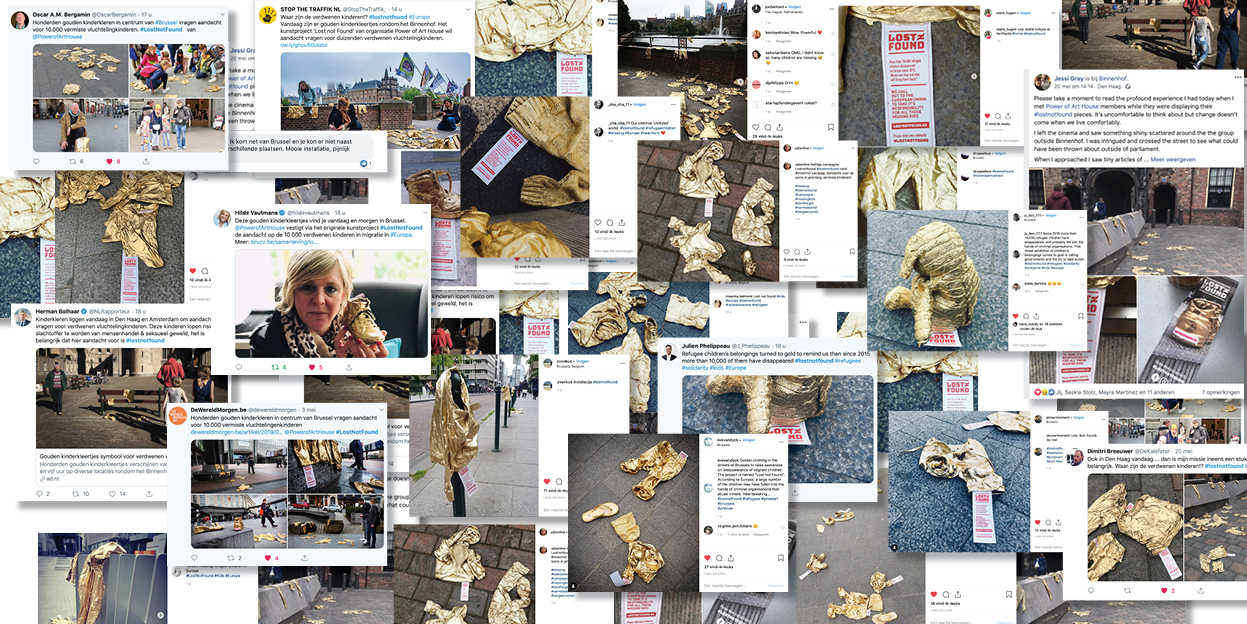 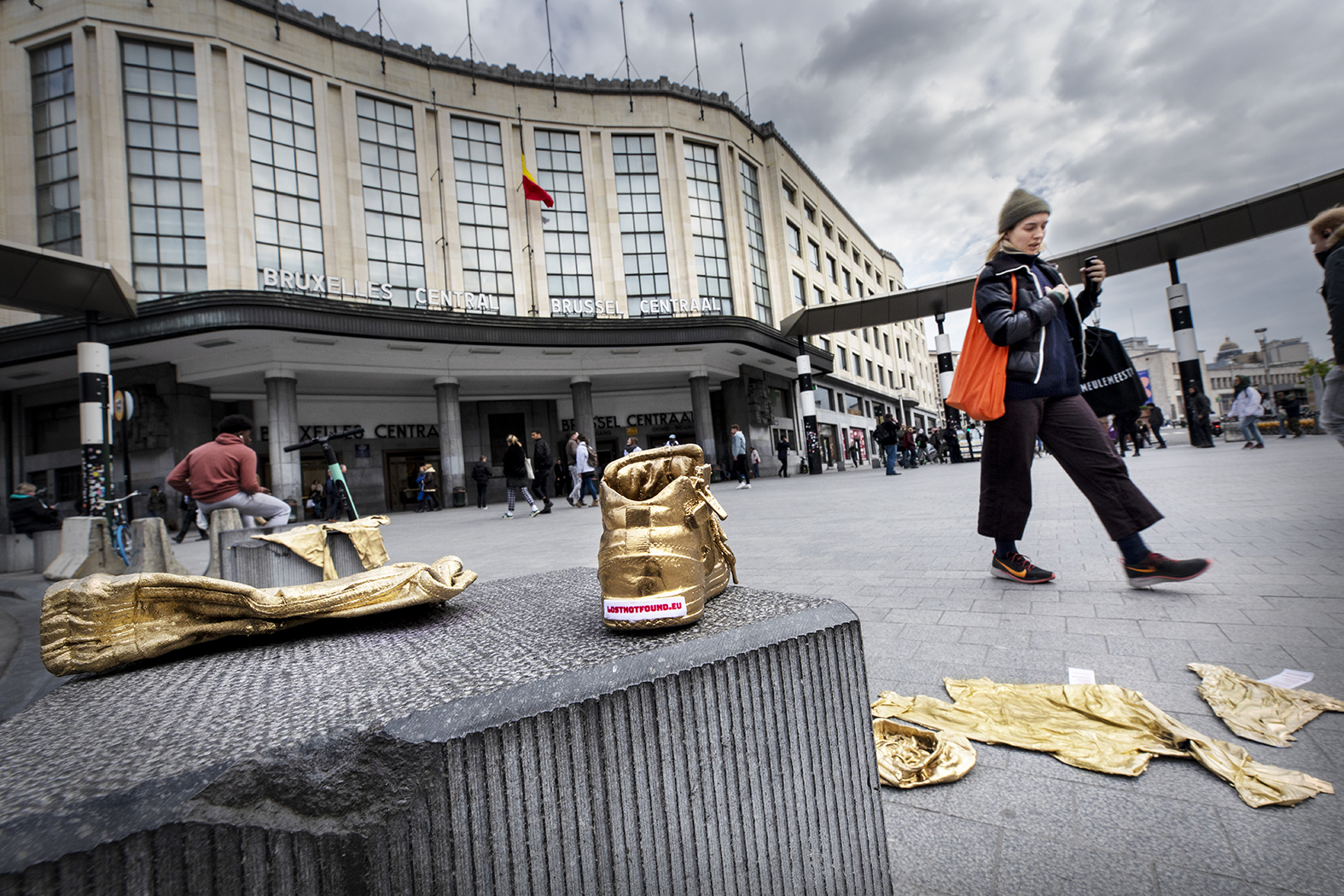